Question: My wife and I are fairly young and have a substantial net worth. We both want to leave all our assets to each other when we die, so we don’t want to take advantage of the $10,000 annual exclusion. We’ve heard that when the second spouse dies, his or her estate will have to pay outrageous estate taxes, and we want our family to receive the lion’s share. What should we do?

Answer: There are as many options as there are circumstances, so the first thing you should do is consult with an estate planning attorney. One of the many common ways to minimize or eliminate the damage of estate taxes is through the use of life insurance. You and your wife could purchase a “second-to-die” life insurance policy, which would insure both of you but would pay its benefits upon the death of the second spouse to die.

The policy should be owned either by the beneficiaries (which should not include the insured individuals or their estates) or an irrevocable trust. You should also make sure that the death benefits will cover any estate taxes that may arise upon the death of the second spouse to die. But before considering this option, be sure to consult with an estate planner.

The Tax Court recently ruled that an estate must be held liable for late filing penalties since the executrix failed to show that she had reasonable cause for filing the estate tax return 10 years late and for failing to pay the estate taxes. Mr. Thomas died in 1986. His wife Helen was appointed executrix of his estate, and she hired an 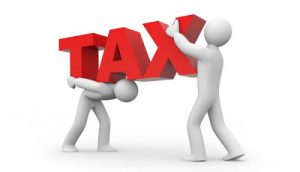 attorney and a CPA to help administer the estate. Though she filed accountings with the probate court, she did not file an estate tax return until more than 10 years after Michael’s death, and she never sought an extension of time to file.

Apparently, Helen was waiting to file the return until the attorney and CPA could determine the taxable values of certain assets. Disputes over these issues were being litigated in state court until November 1994, and Helen then filed the estate tax return in February 1997. The IRS assessed additions to tax under §§6651(a)(1) and (2) for failure to file a timely estate tax return and failure to pay the amount shown on the return. The estate disputed these additions. Before the Tax Court, the estate argued that Helen relied in good faith upon the advice of the estate’s attorney and CPA when she delayed the filing of the return, and that the additions to tax were therefore not applicable.

But the estate failed to establish that Helen received any advice from the attorney or the CPA about delaying the return, so the court upheld the additions to tax. The court also noted that the estate need not know with certainty the values of its assets to file a timely return. Regulations require only that the return be as complete as possible. Both the attorney and CPA testified that they were not hired to file the estate tax return. This case illustrates the importance of hiring an attorney who specializes in probate and estate administration and will make sure that all steps are completed.